Last week, as I read of IIT Kanpur setting up a committee to see if Faiz Ahmed Faiz’s nazm, Hum Dekhenge, was against Hindus, one phrase flashed back into my head from the distant past: the theatre of the absurd.

In the last few years, we have become accustomed to hearing so many absurd and ridiculous statements by politicians that we barely notice what they say. Their utterances are stupid at best and hateful and divisive at worst and most of the time, we barely notice. Sometimes we normalize these things by drawing them into our conversation, first using inverted commas and then not noticing when those fall off. I am thinking here of terms like ‘presstitute’ or ‘sickular’ or the ‘tukde tukde gang’ or ‘anti-national.’

Misogynist, casteist and communal speech are laughed off as if they are only social gaffes. A short period of outrage, directed at no one in particular and heeded by no one at all, and we return to the business of our lives.

I have been thinking of the only absurdist play I have ever studied, The Rhinoceros. In Ionesco’s play, the protagonist watches as one by one, everyone—actually everyone—turns into a rhinoceros. It begins with disbelief, then denial, then curiosity, admiration and wanting to belong. It does not make sense at any stage and the transformation is an awkward overlay on everyday conversations (or the other way around). At the beginning of the play, the rhinoceros is an anomaly, maybe even an optical illusion. By the end, Berenger, the protagonist, is the anomaly.

Towards the end of the play, one of the characters says, “To understand is to justify.” Over the years, as people have sought to explain to me India’s fascination with right-wing politics, the sense of persecution it taps into and our infatuation with what appear to be strong leaders, I have thought of this. The person who said this turned into a rhinoceros. I have resolutely refused to understand.

None of it makes sense. We use rationality and history and evidence, or even principle, to argue against an amoral universe that makes less and less sense, and this is why it is as if we are trapped in an absurdist play. And then I remember that when I was in college, many theatre groups would perform works from this genre and I realise now that while all of it made sense to me in the moment—each line or exchange as a cluster of words did--I can remember none of them as a coherent plot. There was none. Or if there was, then it eluded me. We are so caught up in each moment that we never get or we lose the plot, until it surreptitiously overtakes us.

Nothing makes sense today either except hazy recollections of moments in our collective past. Violence inside sealed gates. Jallianwala Bagh. The rise of the Nazis and Fascists. Police as mute witnesses. The pogroms in 1984 and 2002 against Sikhs in Delhi and Muslims in Gujarat. Us, mute, helpless, ill-informed, unseeing. In our denial and in our fascinations, we become rhinoceroses too.

[PS: Professor Mohammed Ayoob, Emeritus Professor at Michigan State University, has also been remembering the Theatre of the Absurd.]

Posted by Swarna Rajagopalan at 07:19 No comments:

Email ThisBlogThis!Share to TwitterShare to FacebookShare to Pinterest
Labels: Ionesco, Rhinoceros, Theatre of the Absurd

Ayodhya means invincible. But anything with an absolute description like that is surely a metaphor. The town, its spirit and its history are defeated by the human battle over ground and walls and ceilings and this room or that room. The people perhaps defeated by being dragged into what ultimately are squabbles.

The idea... what is the idea of Ayodhya? I think of that para from the Valmiki Ramayana describing Ramrajya that I used to quote a great deal:


“Only more than a month has elapsed since you took the sceptre in your hand, O Raghava! And mortals have become strangers to disease, death does not overtake even men worn out with age, women undergo no labour-pains during parturition and human beings are well-built indeed. An abundance of joy has fallen to the lot of every citizen dwelling in the town, O king! Pouring down nectarean water clouds rain at the proper time. Even the very winds which blow here are capable of giving a delightful touch, and are pleasing and healthful. People living both in the cities and in the country, arriving in the capital, declare, ‘May such a sovereign be our ruler for long’, O king!” (Srimad Valmiki Ramayana, Uttara Kandam XLI: 15-21)

Perfect governance feels like a mirage. An idea easily squashed by human stupidity and cupidity.

Ever since I saw the Ayodhya judgment was due today, I have been thinking of our obsession with a physical location.

I have also been thinking of Sita. Abducted and ensconced in a grove that we, with our obsession for tying ideas down to physical locations, identify with Ella, Bandarawela or Nuwara Eliya in today's Sri Lanka, we are told she still found Rama in her heart, with her, in every part of her day. As she was in his.

To paraphrase a book I love, if you want to be with someone you love, aren't you already there?

Shouldn't devotion to a deity or a divine idea be the same?

I have also been thinking of Rama's perfect and ultimate devotee, Hanuman. Rama does not sit on a throne in a temple. In virtually every traditional illustration, except these stylised angry new Hanumans, Rama dwells in Hanuman's heart.

Hanuman is known for physical strength and valour, for this devotion and for sagesse. He was wise. By holding Rama in his heart, he freed his faith and love and devotion of time and place.

"Having seen your many mouths bearing your terrible teeth, resembling the raging fire at the time of annihilation, I forget where I am and do not know where to go. O Lord of lords, you are the shelter of the universe; please have mercy on me."

I forget where I am and do not know where to go. You are the shelter of the Universe.

But we will confidently pinpoint the location of the birth of the one who is neither born nor dies, who encompasses and embodies and shelters the Universe, although we scarcely know if we are coming or going.

Invincible, are our hubris, our ignorance and our inability to love without limit.

As we wait for the Supreme Court's verdict on the Ayodhya case, in which we have reduced the idea of Rama to the persona of a land litigant, prayers for sense or even magnanimity have failed so we must pray for peace.

We just celebrated Gandhiji's 15oth birthday. In the words of his favourite bhajan:

Posted by Swarna Rajagopalan at 09:03 No comments:

Of cyber satyagrahis and citizenship failures 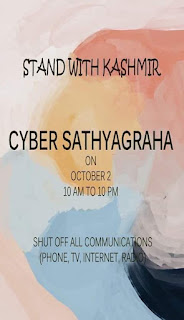 Today, there is a boycott of all communications devices being called for--no phone, TV, Internet, radio. The idea is to simulate the situation that Kashmiris have been forced to live with and to write about it what it feels like.

I saw this a few days ago and knew I would not join. Why? I am traveling, my elderly mother is at a distance, my organisation has a major event scheduled. And as I thought this, I thought, this is also true for Kashmiris. They travel, leaving families and offices behind. They have elderly parents, ailing relatives, young children in another location. They need to remain connected.

And this is the point, precisely.

Kashmiris have had no choice. Nobody asked them, "Is this a convenient time for you to be cut off from the world?" Nobody cares.

On Gandhi Jayanti, we are all writing commentaries on his importance. What he would really like, no doubt, is for someone to say, "End this." And to put their life on the line for it. To fast. To undertake a padayatra. Some kind of civil disobedience. Some genuine expression of solidarity.

I write this and think none of our political leaders would do this. And the question arises, why not me? Why am I not feeling like I can initiate this? Why is it not natural to me to step up and be the satyagrahi in this situation?

I can think of multiple answers to that question. But the challenge remains: Can one of us do what Gandhiji would have to help Kashmiris out of this terrible situation? Can we retain our deep discomfort and pain with this humanitarian crisis? On this day of many celebrations, I can only think that we have failed as citizens. And humans.
Posted by Swarna Rajagopalan at 19:06 No comments:

Where the mind is without fear and the head is held high;

Amma, I seek the courage to stand my ground and speak my truth regardless of how people will troll me and what might happen.

Where knowledge is free;

Please open up all the locked in and locked down and locked out zones of the world, so we can see and hear what is happening there, and people within can learn that our hearts do beat for them as well. Open up all musty rooms with festering conspiracies and stinking closets with rotting secrets and shatter our silences once and for all—let us see what must be seen and call it out for what it is.

Where the world has not been broken up into fragments by narrow domestic walls;

Keep us together—different, diverse, debating, disagreeing, but together. We are, because of each other. Remind us of our common humanity and to be humane with each other.

Where words come out from the depth of truth;

The depth of truth is a dangerous place, Amma. Please protect us as we try to walk this path of understanding and action. Please watch over us.

Where tireless striving stretches its arms towards perfection;

There is so much to do on every front. Replace fatigue, frustration and fear with passion, commitment and love so we might work with focus, fortitude and ferocious energy.

Where the clear stream of reason has not lost its way into the dreary desert sand of dead habit;

Show us the beauty of patient, thoughtful, attentive and deep learning and critical thinking, and teach us to listen to each other with brains and hearts both, and to sift from an appealing feast of fantasy, grains of fact and truth, and to filter from old custom and tradition, and formulate new and better ways of being.

These sinking sands are treacherous for those who will linger, whether in fear or in faith. Lift us, Amma, so we can see the world as it is and find within the space and freedom to speak of what we see and for truth and justice.

Into that heaven of freedom, my Father, let my country awake.

We, who are responsible for the vision of that ‘heaven of freedom’ and the instruction manual on how to build it, fell asleep. Wake us up, Amma. Let us recall and resume our labours.

[Posted with apologies to Gurudev Rabindranath Tagore for marring his beautiful poem with my clumsy prose, just as we have let go of his dream of  a heaven of freedom with our apathy. His words, which once filled me with joy and hope and dreams now make me sad as they remind me of how we have failed ourselves.]

Posted by Swarna Rajagopalan at 08:13 No comments:

Email ThisBlogThis!Share to TwitterShare to FacebookShare to Pinterest
Labels: 2019, August 15 2019, Independence Day, Tagore, Where the mind is without fear
Older Posts Home
Subscribe to: Posts (Atom)